This plugin has been seen on... 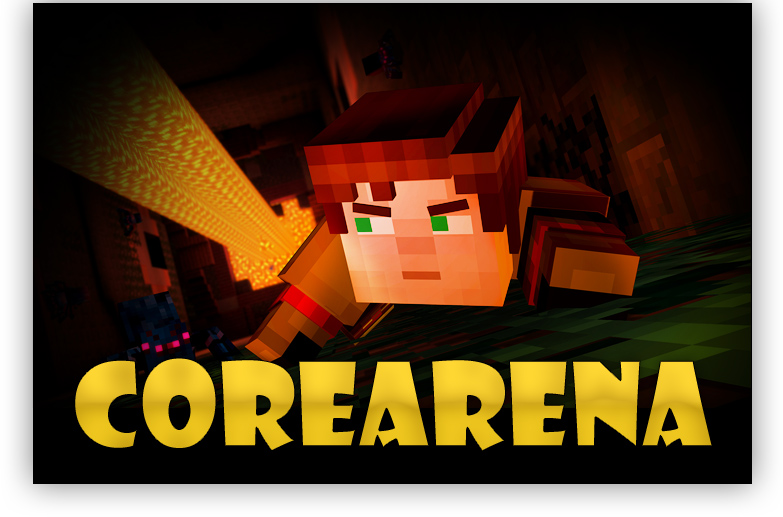 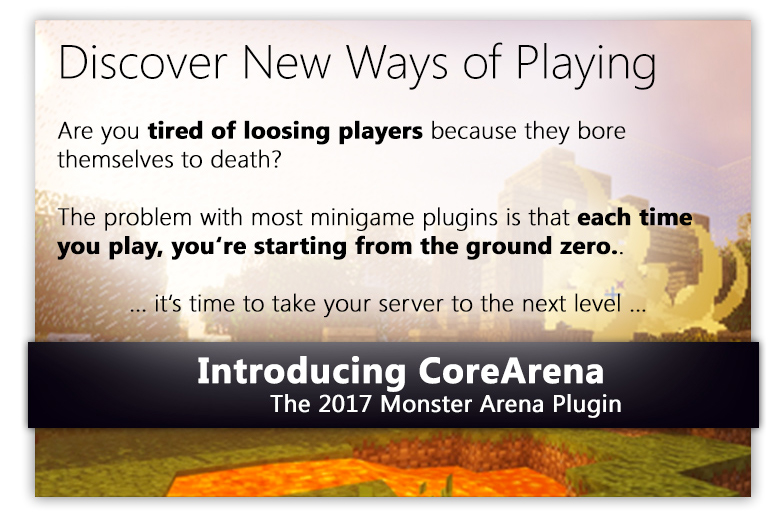 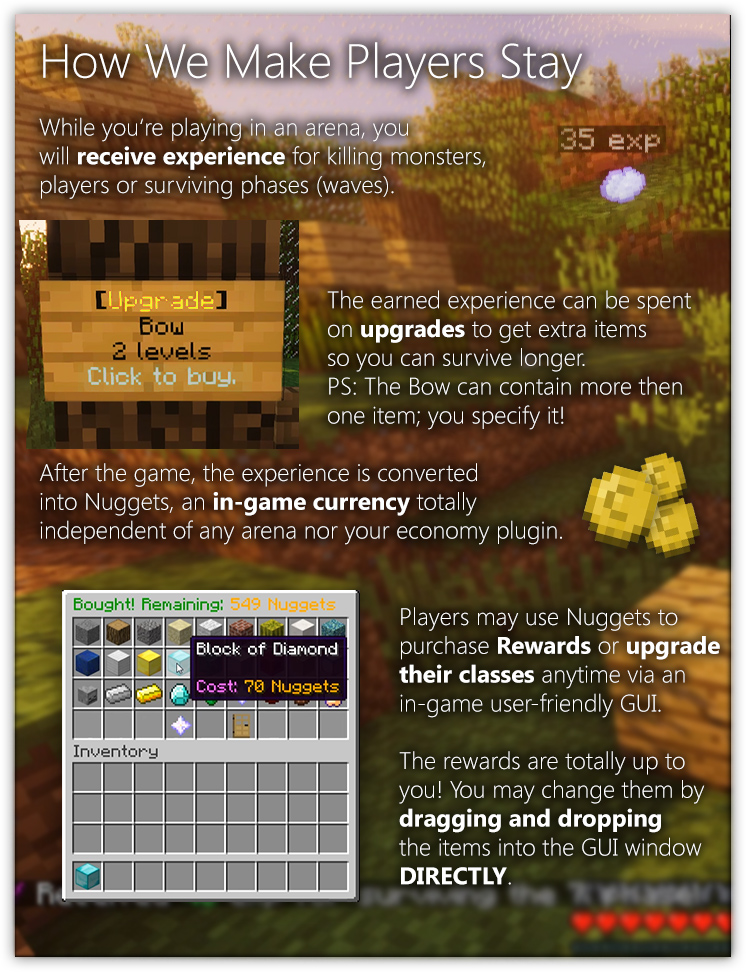 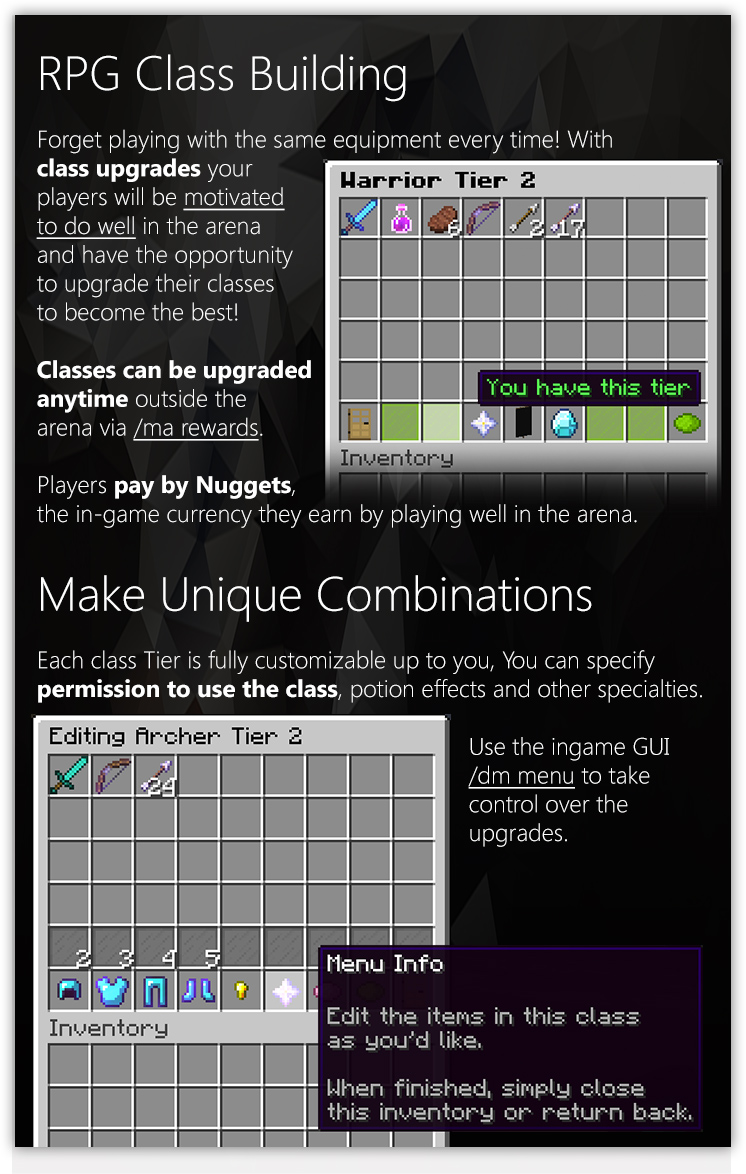 Live Gameplay Video
(Commentary in the Czech language.)
A big thanks to Jarda for making it!

If you know me personally - you know I’m all about standards. That’s why I've spent the last three months meticulously perfecting a completely new way of playing on a Minecraft server.

But more on that later…

See, there are DOZENS of mini-game plugins that offer many, many arena types and have a great amount of features, but the truth is:

Few of them do its original goal properly and so MAKES YOUR PLAYERS STAY AND HAVE A GOOD TIME.

CoreArena is a journey that, players walk and develop themselves through. That way they can grow themselves every time they play in the arena, no matter how far in the arena they get.

My Experience Dealing With
Minigame Plugins

Short story (review not mine):

Sure it’s fun for the first 3,4,5 times, but then it becomes a boring struggle and players rather leave to those big servers that can spend hundreds of dollars of development of custom designed plugins…

Have Big-Server Features on Your Server

Our approach
> Clean user interface designed to be as simple yet powerful as possible. We still have a few configuration files for geeks requiring advanced options, but all the major settings can be changed in menus within few clicks.
> The arenas, classes, upgrades and rewards are checked at plugin startup and they refuse to load if they are misconfigured. No loading of broken arenas.
> When there is an unexpected error, the arena is stopped (the first snapshot is restored and we try to restore as much as possible step-by-step) and all players are kicked for safety.
> Consistent updates and customer service at your hand when you need it. Send me a PM or open a ticket on GitHub.
> Unique leveling system with in-game currency and upgrades.
> Upgrade-able class system.

We are available directly at SpigotMC or Github. All PM's are answered. Response times are all between 2h to 48h depending on the time zone, holidays and the amount of other tickets to answer.

Not only you will receive a professional game server’s experience on your server, but CoreArena is also:

✰ Relatable. I had a server for many years myself, tried lots of different pvp/monster arena plugins. After various testing I've tried to make CoreArena simple for both you and your players.

✰ Understandable. After having a production server I noticed what it makes easy or difficult to understand new plugins, and so I tried to make CoreArena as intuitive as possible, with its clean user interface and documentation in all files.

✰ Focused. This is not all-in-one product. No, we don’t have 8 average game variants of which none really works or brings anything unique. We have one that does its job well.

✰ Stable. Afraid to leave arenas playing while you’re offline for players being stuck there / exploiting / griefing them. On any error the arena is stopped and the players are moved to the spawn.

✰ With unlimited possibilities. Be unlike everyone else! Create own fine-tuned monster spawners that spawn exactly what you want, and when you wish it. Each arena can be individually customized by many settings, making it unique.

✰ Explosive Bow that shoots Explosive Arrows that explode when the hit the surface. This can be used to procedurally damage the arena. Accessible via "/ma items".

✰ Hell-fire! Right clicking with a fireball in your hand will launch it. Just like the fire-ball from a Ghast, the hell-fire damages the ground when it hits.

✰ Automatic TNT ignition when placing a TNT inside the arena.

✰ Wolf guards! Right clicking with a bone spawns a wolf that fights with you.

✰ Boss and MythicMobs are supported. Simply obtain the boss egg via "/b egg" or "/mm eggs get" and place it to your monster spawner.

✰ Chest refilling that makes it possible to fill the chests again with their original content as they were when the arena started.

✰ AutoPlay support! AutoPlay is a plugin that can be set to take control over your server and automatically rotate arenas, with a configurable break in which players wait in the waiting lobby and may select their classes. The Nuggets may be transferred out of the server to your hub via MySQL.

PS: In case you're using the MobArena plugin, you can easily change the command label in settings.yml so it won't interfere. 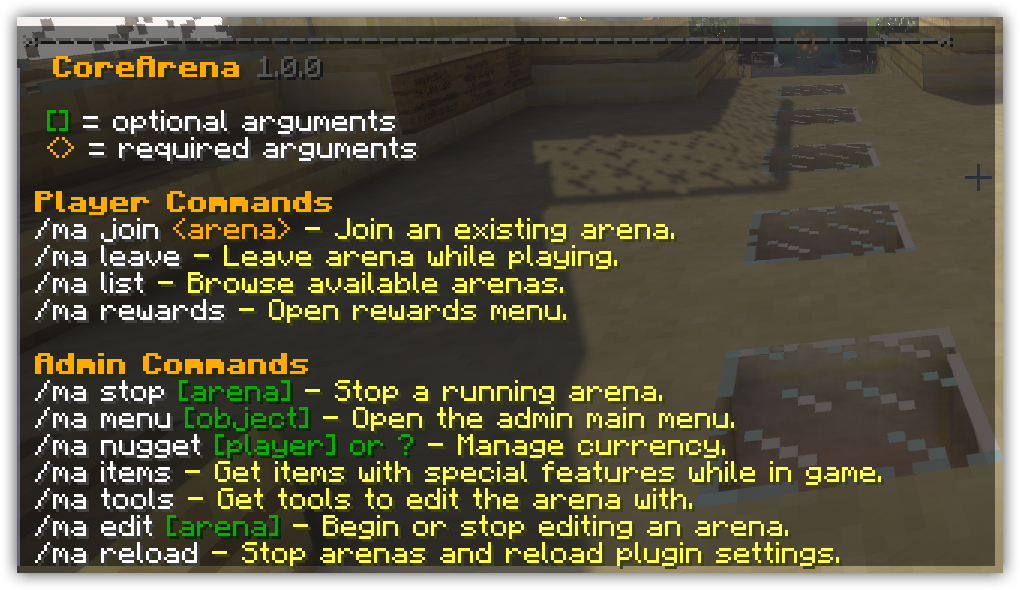 Miscellaneous:
Permission: corearena.tools
Info: Allows right clicking with tools as specified in the tools menu and use them.

GameAPI is required. This is just a library that does nothing but allows us to function.

*1 Procedural damage requires Minecraft 1.8 or greater.
*2 Minecraft 1.8 will not render setup blocks due to lacking libraries.
*3 Scoreboard on Minecraft 1.7.10 is limited to 16 characters per line at maximum.

DO NOT BUY THIS PLUGIN BEFORE YOU HAVE:
1) Read this page and understood its content. Do not make a blind purchase. Know, what this plugin can and cannot bring. It's not a miracle. Please do not take it out of the context. You still have to make an effort to make your server a good place. This plugin alone can't do this.
2) Understood that any success statements, or success examples, that may be accomplished by this plugin are only estimates of what we from our experience think you can achieve.
3) Acknowledged known cave-acts and limitations. Please respect that the plugin is not perfect. Just as with any other machine, it is a subject to flaws and limitations.
4) Agreed with Terms of Service (below).

§1 I retain all rights and do not permit distribution, reproduction, or derivative works.
§2 The software is provided as it is, without any warranties on its functionality. I do my best to give honest and accurate customer support, but please be aware of the human factor.
§3 No refunds, as one does not have a right to get a refund for such digital item, because you have been gained access to it instantly and may have used it.
§4 One purchase per one (1) Minecraft server, or one (1) instance of a bungee network.
§5 Reverse engineering and decompiling the plugin is prohibited.
§6 I can’t physically prevent you from putting the plugin on the internet, but you may receive a significant amount of stress from legal issues and it's scientifically proven that stress shorten one's life and in worst case may lead to a heart attack.

☼ Enjoyed? Take 1 minute and write a ✰✰✰✰✰ review!
It's that simple!

Not sure if it is my bad but its not working :( Anybody can help me please :) ?
Do you have any of the map downloads OP?
Read more…
Top Bottom